ALOHA TO MY BELOVED HUSBAND 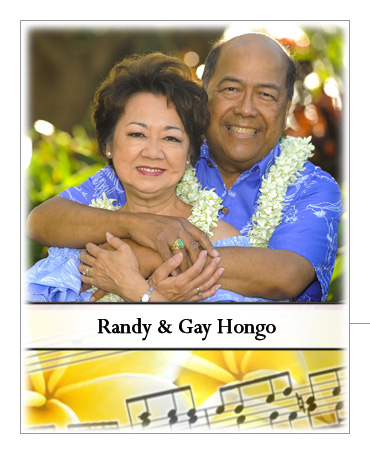 ALOHA TO MY BELOVED HUSBAND

For the last few days Randy was burping a lot. He also had diarrhea. (At this point Randy would have said to me “TMI – Too much information”.) So he thought his chest pains were caused by indigestion and dehydration. On December 16 he was concerned that his blood pressure was low and his heart rate was high. His cardiologist Joanna Magno would keep in touch and told him to take his nitroglycerin. Repeat every five minutes if symptoms continue. But after one dose he felt better so he did not want another dose. He also continued his many other heart medications.
We were scheduled to sing at Hawaii Kai Assisted care center for Genie Keanu and her fellow residents at 10am. Then sing for Salt Lake Senior citizens Christmas party.

He had been going to Luk Tung Kuen – a chinese exercise class there and volunteered to sing for them. I saw that Randy was not feeling well so I told him “Let me take you to the emergency room now while you are able to walk because if you fall I certainly am not able to lift you up.” He said “No! I have to go. Who’s gonna play piano for you? I said “the Kalihi Moanalua church youth choir is singing with us and they have ukulele, guitar and bass” He said “I want to go. If I get tired just stick me in a corner and let me rest until time for me to play piano for you.”

The Hawaii Kai Retirement center has three retirement and assisted care centers and I did not know which to go to. Randy knew the way but he was too weak to help. I left Randy in the car in the parking lot and went in to Building II to ask directions to Building III. As soon as I entered a lady came running in and said “Help a man just fell outside.” I rushed out and saw Randy lying on the ground. A nurse called “Randy! Randy!” He tried to get up and said “I have to go sing.” She said “Don’t move. Stay where you are. The ambulance is coming.” Then she leaned over him and told me “I can’t find a pulse”. The firemen arrived first and started CPR. The ambulance came soon after and put monitors on him and kept pumping his heart.
Dr. Joanna Magno met us in the ER and told them to stop. It was 11:15 when Dr. Watanabe the ER doctor told me. “Your husband has been dead since 10:15 when he was on the ground. We did our best to revive him.”
Dr. Magno said “Randy most likely had a heart attack a couple of days ago when his belching started. That could be a symptom. It could be that he suffered another attack when He fell.”
Pastor Jonathan Steeper came and prayed with me. He helped me secure a time for me for a celebration service at Kalihi Union Church. Saturday, December 23, 9 a.m. visitation and 11 a.m. Service.
December 2011 Randy was diagnosed with Multiple Myeloma and was admitted to City of Hope Cancer Hospital in California. At that time Andrew and I feared the worst and started thinking of his funeral. God was so gracious in giving Randy six more years to live. Everyday we had with Randy was a gift. We had six years to plan Randy’s funeral.
Christian Vision will continue as long as God allows.
Kalihi Union Church is committed to see that the Hongo Music and Life Center be built in God’s time.
What I loved about Randy was his grateful heart. Everyday he thanked God for another day of life. Everyday he thanked me for lovingly caring for him and for putting up with his monku (complaining). He would say “Thank you Jesus for giving me a beautiful, talented, loving wife and thank you Jesus (at this point the tears flowed) for giving me Andrew! And now I thank you Jesus for giving us Meaghan!” I loved Randy’s sense of humor. He could laugh at himself even through his many health challenges. Laughter is the best medicine. It has gotten us through all the rough times. Even now as I begin to face life without my beloved partner I recall all the funny things we did that make me laugh through the tears. What I loved most about Randy was his love for Jesus and his awareness of how deeply he was loved by his Savior. His greatest desire was for all family and friends to know this love which is the greatest love of all.

For those of you who couldn’t make it, we have a recording of the service below. Thank you for your prayers and gifts to the Hongo family.